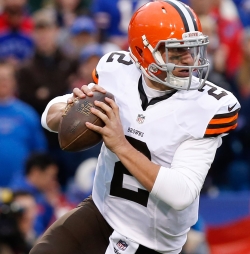 With three weeks left in the NFL Regular Season, only three teams have guaranteed their ticket to the postseason, and only one team has guaranteed themselves a first-round bye. But with all the uncertainly surrounding the NFL Playoffs, the sportsbooks have pegged two teams as overwhelming favorites to win their respective conferences.

The New England Patriots regained command of the AFC with a big win in Houston last weekend, and coupled with outright losses by both Denver and Cincinnati, the Patriots are now a commanding +110 favorite to represent the AFC in the Super Bowl.

The two closest teams to the Patriots in terms of AFC Future Odds are Denver and Pittsburgh, who are each returning a 4:1 payout.

Denver is closed to wrapping up the AFC West Division, holding a two-game lead over the Kansas City Chiefs. Pittsburgh is the popular choice for a dark horse candidate, as they aren’t even currently slated for a playoff spot (although they own identical records with Kansas City and the New York Jets for the two Wild Card spots). The Steelers and Broncos square off this weekend in a very important matchup in Pittsburgh, with the online sportsbooks listing the hometown Steelers as a big 6.5-point home favorite.

The best value on the board for AFC Futures is the Cincinnati Bengals, who are a full two games ahead of the Steelers in the AFC North and have a relatively easy schedule the rest of the way with games against San Francisco and Baltimore still remaining. Cincinnati is a big 13:1 longshot to get out of the AFC despite being the current #2 seed in the conference.

Over in the NFC, it’s no surprise that Carolina is the overwhelming favorite to represent the conference in the Super Bowl, as the online sportsbooks list the Panthers as a +115 choice to win the conference. Arizona isn’t too far behind at +225, and the Cardinals are the only other team in the NFL to have already clinched a playoff spot.

Green Bay, Minnesota, and Seattle have all but mathematically clinched their postseason tickets, but while Seattle is +275 to win the NFC and Green Bay is right behind them at +450, the Vikings aren’t given much of a chance by the online sportsbook as they are a big 30:1 longshot.

The NFC East is a complete mess, with three teams leading the division with losing 6-7 records. The Giants are the sportsbooks choice to come out, listing them as a 25:1 longshot to win the conference.

That’s not the only conference that may send a losing team to the playoffs. Indianapolis and Houston are tied for the lead of the AFC South Division with 6-7 records, however those teams square off in Indy this Sunday and both teams face very easy opponents the next two weeks. There is no early line on that Texans-Colts clash as both teams have injury concerns at the starting quarterback position.

We’ll be back next week to update the NFL betting Playoffs outlook with a much clearer picture after this weekend’s action.