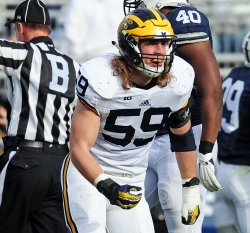 This is always one of the biggest football weekends of the year, with games played throughout the day both on Friday and Saturday. Friday has two games with major CFP implications with #4 Iowa taking on Nebraska as well as the big Baylor vs. TCU matchup in the Big 12.

Iowa cracked the Top Four of the latest CFP Rankings and face one of their toughest challenges of the season this Friday. This online sportsbook list the Hawkeyes as a slim 1.5-point favorite despite Iowa coming into this game with an unbeaten 11-0 record.

Perhaps this line reflects the urgency of Nebraska to win this game, needing one more victory to become bowl eligible. Hawkeyes have covered the spread in 12 of their last 14 road games overall, and we can’t imagine more motivation than playing for a spot in the College Football playoffs.

The other big game on Friday sees #7 Baylor taking on #19 TCU. The Bears will be down to their third-string quarterback after backup QB Jarrett Stidham broke his ankle last week in a win against Oklahoma State. TCU also has injury issues at the quarterback position (as well as receiver and center) with stud QB Trevone Boykin trying to recover from his injury. Boykin is listed as “questionable” but has a decent shot to play in this game, however he won’t be 100%. The online sportsbooks are not losing faith in Baylor despite their QB injuries, listing the Bears as a slim 2-point road underdog.

Rivalry games are everywhere on Saturday, starting at Noon ET with the biggest rivalry in College Football. Ohio State dropped to #8 in the latest rankings after suffering their first loss of the season last week, and take on another Top Ten foe in arch rival Michigan (ranked #10). Buckeyes have dominated this series of late winning 10 of the last 11 games outright – one of the main reasons the Wolverines hired Jim Harbaugh in the offseason. The online sportsbooks have this game as a pick ‘em.

The Iron Bowl isn’t nearly as big as it had been in year’s past with Auburn’s struggles, but it’s still a big game for Alabama who is trying to maintain their #2 ranking in the CFP Polls. Tigers are a big 14-point underdog at home and are given little chance to win this game with virtually no passing game and Alabama’s dominant rush defense. Auburn has only covered the spread twice all season.

After back-to-back ugly showings, the Florida Gators are actually a home underdog against a lower-rated Florida State team this Saturday. Gators only beat Vanderbilt by two points a few weeks ago and then needed overtime to get past Florida Atlantic last week. Both of FSU’s losses have come on the road this year but have the far better offense in this matchup. Gators have lost four of the last five matchups in this series.

Other big football betting matchups this weekend include #6 Notre Dame at #9 Stanford, with the Cardinal listed as a 3.5-point home favorite, and #3 Oklahoma a 7-point road choice at #11 Oklahoma State with a Big 12 Championship on the line.