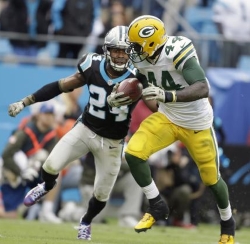 It’s the middle of November, and it’s time to start paying attention to playoff standings in the NFL. Thursday night’s AFC East matchup between the Bills and Jets has playoff implications as New York currently is slotted for one of the Wild Card entries, while Buffalo is right behind them.

New York is a small 2.5-point home favorite thanks to home field advantage, but lost both games vs. the Bills last season. Buffalo is a rush-heavy offense that may struggle against a Jets defense that is only allowing 81 rushing yards per game.

The biggest favorite on the board this weekend is Green Bay, who enters this home game against the Detroit Lions after suffering back-to-back road losses against Denver and Carolina.

Those two teams are a combined 15-1 straight up this season, so the Packers take a huge step down in class facing a 1-7 Lions squad. That 1-7 record has Detroit with the worst record in the league by themselves. The online sportsbooks have Green Bay as a huge 11-point favorite making the online sports betting very exciting. Packers were listed as a double-digit favorite just one so far, winning by 7 points against San Diego so coming up short against the spread. Detroit is just 1-7 ATS on the season.

Carolina is one of three undefeated teams remaining, and with their outright underdog home win against Green Bay last week the online sportsbooks are finally starting to adjust their lines. Carolina is on the road this week at Tennessee, and are listed as a four-point favorite. Panthers have covered the spread in all three of their road games this season. Tennessee broke a six-game losing streak with an overtime win at New Orleans last week.

Pittsburgh will take the field without starting RB Le’Veon Bell and starting QB Ben Roethlisberger yet again, after Big Ben was injured last week. Both players have now missed games with two separate injuries, and while the Steelers are currently slated for a Wild Card berth, they need to find a way to stay healthy if they want to make any kind of postseason run. The good news is that they play a two-win Browns team this week. Despite the injuries, Pittsburgh is a solid 4.5-point home favorite.

Besides Carolina, the other two undefeated teams are also solid favorite. New England is 7.5-point road choice at New York against the Giants, while Cincinnati is a big 10.5-point favorite at home against Houston on Monday night. The Bengals had no problems covering a similarly big number last Thursday at home vs. Cleveland, winning 31-10 and covering a line that moved up to 13 points by kickoff.

We’ll be back next week to review Week 11 in the NFL from a betting perspective.  Don't forget that we are the best source of information to bet sports online from news, to tips to sportsbook promotions we are the best!