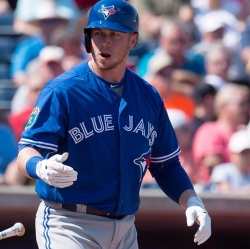 This past Saturday, the Toronto Blue Jays have agreed to an extension with first baseman Justin Smoak for a two year contract for a cool $8.5 million that will cover the 2017 and 2018 baseball season.

Smoke has been playing in Major League Baseball for seven seasons and is currently making $3.9 million this year.  In addition, this year he is eligible to become a free agent and chose an extension with the Toronto Blue Jays.

Smoake first came on the MLB scene back in 2010 when he signed up with the Texas Ranger at the last minute for a $3.5 million signing bonus where he was assigned to one of the Ranger’s Class-A affiliates.  During the 2010 season, he was then traded to the Seattle Mariners where he batted .340 with three home runs in the final 14 games of his rookie year.

Smoak considers this extension a great thing for his family as he said that “We love Toronto, me and my family, and we wanted to stay here as long as we can.”

This is a huge commitment to Smoak from the Toronto Blue Jays and most sports handicappers agree that there is a lot of potential left for Smoak to achieve judging by the terms of his extension.

“We do feel like he has the potential to play every day, but it really comes down to alternatives said Ross Atkins the General Manager of the Blue Jays.  Atkins hopes that this will offer the team some stability as they still have 8 players that are ending their free agent status.

Click Here to see where to bet on baseball