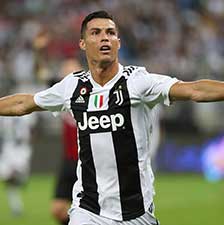 The Cristiano Ronaldo tax fraud case reached its end. Almost four years after the start of the investigation, the Juventus forward appeared in court to plead guilty. In addition, he agreed to pay the fine of around $21.5 million.
Ronaldo was facing tax fraud charges from his time with Real Madrid. He spent less than an hour in court to sign the agreement. As a result of his guilty fee, the court gave him a two-year suspended sentence.
The football superstar will not serve any jail time because Spanish judges can suspend sentences for first-time offenders. Although he pleaded guilty to the Ronaldo tax fraud case, he left the court smiling. Ronaldo told sports betting news sites that the case is over.

Ronaldo wanted to enter building straight from the parking lot for security reasons. However, the court dismissed his request and made him enter through the main entrance. The Juventus player came with his lawyers and girlfriend Georgina Rodriguez.
Ronaldo made the deal to plead guilty last year. The investigation started into the Ronaldo tax fraud case began in 2015. In 2017, a state prosecutor accused him of four counts of tax fraud. In addition, the prosecutor said the football player used shell companies to hide income from image rights.
According to sportsbook pay per head experts, tax fraud accusations didn’t involve his income from Real Madrid. In 2017, Ronaldo told a judge that he never tried to avoid paying the right amount of taxes.
In recent years, Spanish tax authorities have investigated several soccer players of tax fraud, including Lionel Messi, Xabi Alonso, Marcelo, Ricardo Carvalho, and Fabio Coentrao, just to name a few.
The Ronaldo tax fraud case is not the only legal battle the pro athlete is facing. He is also facing a rape case in the US. Kathryn Mayorga filed a lawsuit in September claiming the player raped her in 2009.
Although Ronaldo denied the allegation, the police reopened the investigation upon the victim’s request. Juventus supports their star player. There’s no indicator that the team will drop him and it is unlikely that Ronaldo might try to learn how to become a bookie anytime soon.
Category: Sports Betting News