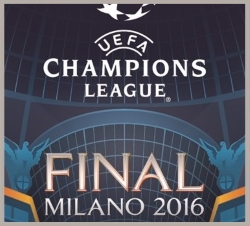 After Barcelona, Bayern Munich is the next choice to win it all, returning a +225 payout. But unlike Barcelona, the FCB has a much tougher task on Tuesday. The majrity of online sportsbooks do list Bayern Munich as the favorite, but with a +150 return for a victory while Juventus will net a +195 payday for the win. Juventus will be playing on their home field, and if Bayern Munich can even earn a draw it would be considered a favorable result. The draw is returning the best payday on the board at +215 – an attractive wager considering the stakes.

Manchester City will likely be the English Premier League’s best chance to send a team through to the next round, as City is a big -500 favorite to advance. They are also a +115 favorite to best Dynamo Kiev on Wednesday (+235 payouts for the Ukraine team to upset as well as +235 for a draw). Manchester City is a +950 longshot to win the tournament – far better than EPL counterparts Arsenal (28:1) and Chelsea (23:1).

The other match being played on Wednesday pits Athletico Madrid against PSV Eindhoven, with the Spanish side a hefty -130 choice to emerge victorious. Athletic Madrid shares an identical +950 future payout with Manchester City for their tournament future odds. If the Netherlands side can pull the upset they will return a +375 payout (draw pays +230).

We’ll be back to preview the second leg of the Champions League Tournament in a few weeks.