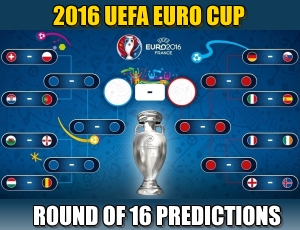 Lots of speculations but for now, let’s go with our top predictions for the UEFA Euro Cup Round of 16 Predictions

Despite England voting on leaving the European Union and the consequences that may affect this decision which include the English team not being able to participate in the Euro Cup, it remains one of the top teams in the European League and we expect England to come out victorious.

Most online sportsbooks have England at 4-7 odds while Iceland is at 8-1 odds and the last time England played Iceland was back in 2004 when England defeated them 6-1.  We believe this will be a close match that my end up with England defeating Iceland in overtime.

This will be a match to watch as we have two of the strongest team in the Euro League battling it out with odds at Spain 6/5, Italy 10/3, Draw 2/1 according to BetOnline.ag.

Both teams lost their final group stage match and this will be the 3tth time that these teams go head-to-head against each other.  This matchup is anyone’s game as each team has won 10 matches against the other and had a total of 14 draws through their history.

This is definitively a revenge match for Ireland as they still remember Thierry Henry’s handball to score the defining goal during overtime of the 2009 World Cup Qualifying play.  If Ireland manages to beat France on their home field on Sunday it would be the ultimate revenge for Ireland.

However, France has been an unbeaten team in their last 15 major tournament game at home and France will have the advantage.