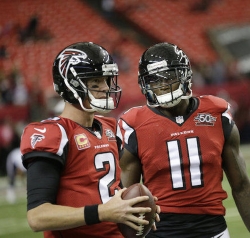 As teams get further into the season without losing, casual NFL bettors tend to put a heavier emphasis on outright victories and pay far less attention to ATS records. This leads to the online sportsbook gradually raising the lines on these undefeated teams, and even if they start to lose ATS but win outright, these lines will continue to go up.

Atlanta started the year with three consecutive victories in the role of the underdog. They have since been favored in their two most recent games, covering the spread in a blowout win against Houston and then suffering their first ATS loss of the year in a six-point overtime win vs. Washington as a 7-point home favorite.

This Thursday night, they are a three-point road favorite at New Orleans, which is the equivalent of being a nine-point home favorite.

The Green Bay Packers are a big favorite this week, laying 9.5 points in Lambeau Field against the San Diego Chargers. Green Bay has won and covered the spread in all five of their games, but have played a relatively weak schedule thus far including games against Chicago, Kansas City, San Francisco, and St. Louis. The Packers have not won any of those games by more than two touchdowns.

While not the biggest favorite on the board, the fact that New England is laying 7.5 points on the road against the Indianapolis Colts means the Patriots would be a 13.5-point favorite had they been the host in this matchup. Patriots are coming off back-to-back blowout wins and covers against Jacksonville and Dallas, and with not too many tough opponents on their schedule the rest of the way out the online sportsbooks will likely have them listed as a big favorite often.

Carolina seems to be the one team in the group of six undefeated NFL teams that isn’t yet being overvalued by the online sportsbooks. The Panthers are a big 6.5-point road underdog at Seattle, who admittedly has one of the best home field advantages in the entire league, but we doubt any of the other five undefeated teams would be getting 6.5 points in this spot.

Denver and Cincinnati are the final two unbeaten clubs, who are listed for this week's football betting as road favorites and would be listed as close to a double-digit favorite had they been the home team. These teams are more than overdue for a bad game, and having to lay high prices means you can cash in fading them even if they still win the game outright.

Keep this in mind as you handicap the games this weekend and going forward.