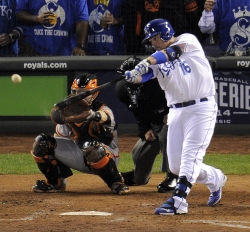 The National League has already locked up all five teams for the postseason. The Mets and Dodgers have wrapped up their divisions, while St. Louis, Pittsburgh, and Chicago have already punched their playoff tickets.

While the Cardinals have not yet clinched the NL Central and overall home field advantage through the NL Playoffs, they are up four games on Pittsburgh with just five games to play, so that is merely a formality at this point.

In the American League, Toronto and Kansas City have locked up their playoff appearances, but there is still much to be decided in terms of the AL West winner and the two Wild Card spots.

According to most MLB Baseball Betting Websites, Minnesota and Cleveland are still mathematically in the hunt, but would need to basically win out and get a ton of luck to sneak in. The real race is between the top three teams in the AL West – separated by just 2.5 games with one of those teams destined to be left out.

Texas currently hold a two-game lead over the red hot Los Angeles Angels, who have won seven games in a row to get back into the playoff hunt. Houston is a half-game behind the Angels, but have a favorable scheduling going forward.

The Angels and Rangers play a four-game series in Texas to close the season. Because of this, the Astros control their own destiny, as LA and Texas will have four losses between them this weekend. If Houston can win out their last four games (as a -165 favorite tonight at Seattle and then three games at Arizona this weekend), then they will assure themselves a spot in the playoffs regardless of what happens this weekend in Texas.

We mentioned LA’s red hot 7-0 winning run entering Wednesday night, and according to several baseball betting news experts, they will have confidence entering that big weekend series at Texas not only because of that winning run, but also their 10-5 record against the Rangers this season.

The last time the Angels and Rangers met (in Los Angeles), Texas was outscored 13-4 in the three-game series, losing two of those three games including a 7-0 shutout loss in the series finale. Depending on how Houston fares Wednesday night and Seattle and in their series against the Diamondbacks, Texas could shift their starting pitchers around to get ready for the postseason if they clinch a spot early. This series will need to be handicapped on a day-by-day basis with so many factors in play.

We’ll be back next week to preview the opening series of the MLB Postseason so be on the lookout for sportsbook promotions to double your baseball betting bankroll!