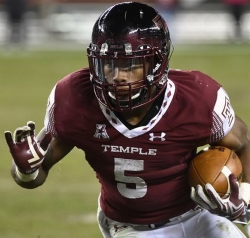 After a thrilling week of College Football action we do it again this weekend, including three teams ranked in the AP Top 25 playing before Saturday. Thursday night sees two Top 25 teams taking the field, however the sportsbooks expect those ranked teams to lose outright.

#22 Temple is a 2.5-point road underdog at East Carolina, and while Temple was able to beat ECU last year as a big 10-point underdog, they did so despite being on the road end of a 432-135 total yardage discrepancy. Owls won that game thanks to a 5-0 turnover margin – something they shouldn’t be counting on this time around.

#20 California is a 3.5-point road underdog at UCLA. The Bruins gave up 310 rushing yards in a blowout loss against Stanford this week, but get a much easier on-field matchup against Cal, who employs a pass-heavy offensive attack. UCLA held a 236-57 rushing edge last year in this meeting while winning by a slim two-point

margin on the road.

#1 Ohio State isn’t expected to have much trouble with Rutgers, as the Buckeyes are a big 21-point favorite on the road. This game still provides intrigue, however, as the Buckeyes are now going with JT Barrett at quarterback instead of Cardale Jones. Buckeyes opened the season as the unanimous #1 team in the AP Poll, and while they still hold the top ranking they have been rather unimpressive this season.

Perhaps the best matchup this weekend takes place in the SEC as #15 Texas A&M visits #24 Ole’ Miss. Despite the better ranking, the Aggies are a solid 6-point underdog on the road. This is the only game featuring two teams ranked in the Top 25, and both squads enter this Saturday after suffering losses last week. Texas A&M had their first loss of the season in an 18-point defeat at home vs. Alabama, while Ole’ Miss lost their second game of the year in an outright loss at Memphis as a big ten-point road choice.

Despite the lack of game featuring two ranked teams, this weekend promises to be memorable with the amount of ranked teams being listed as underdogs. Remember, the online sportsbooks are usually a better gauge than the polls, and take into account public perception when setting the betting lines. Don’t get caught in a trap backing a team just because they are ranked.

We’ll be back next week to preview the marquee matchups for the ninth week of the College Football season from a football betting perspective.