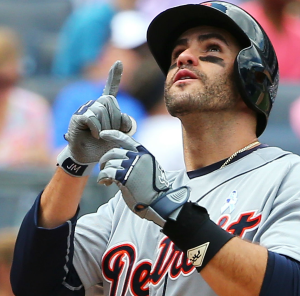 Once again it is time for the MLB Trade Deadline and every fan, sports handicapper and sportsbook is eagerly waiting to see who will go where. According to several sportsbook price per head reviews, several sportsbooks have even started to make odds on players being traded.

Just to give you a preview of what is to come we have come up with a list of the top 5 MLB Players that will most likely be traded to another team.

Ozuna is a 26 year old left fields player for the Miami Marlins who is available for trade. Just like a baseball card, he could fetch Miami some good talent if a trae goes in affect.  According to his contract, Miami has control of Ozuna until the end of the 2019 season and is currently at an OPS+ of 154.

Hailing from the Dominican Republic, Ozuna made his baseball career in 2008 when he signed up with the Florida Marlins as a non-drafted agent in the minor league.  In 2013, he began his career as an MLB player for the Miami Marlins.

– Martinez is currently a right fielder for the Detroit Lions and before then played for the Houston Astros.  He is on our MLB trade radar because he is a pending free agent.  He is seen as a powerhouse hitter with an OPS+ of 146 while averaging 35 homes and 40 doubles per games since 2014.

Martinez who is of Cuban decent was drafter straight out of high school in 2006 by the Minnesota Twins in the 36th round.  Instead, he going straight to the MLB, he ended up going to college and ended up becoming the first layer ever drafter our of Nova Southeastern university. He will be an asset to any team that ends up with him

Neshek is a veteran relief pitcher for the Philadelphia Phillies and his contract with the Phillies is about to expire. The 36 year old right hander is in great shape this season only allowing two runs and showing great command-and-control numbers.

Robertson is a relief pitcher for the Chicago White Sox and even though he is not the dominator he once was, he is still an effecter relief pitcher with plenty of experience.  He is currently contracted to the White Sox until the end of 2018 and rumors have been flying about possibly being traded to the Washington Nationals.

The 36 year center fielder for the New York Mets may have had a horrible month of April but he is still considered a power hitter.  The Mets did say that they are not opposed to get a trade offer for Granderson who is currently still under his $60 million four year contract with the Mets.

Granderson is not new to the trade rumor talk as there was talk of him being traded in December of last year which never took place.

Every year it’s the same deal when it comes to MLB player trading.  In the end, a player liability for one team may end up an asset for another team as it has been proven several times before.