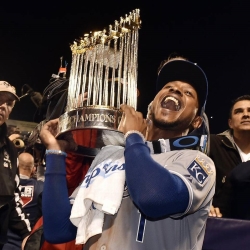 Kansas City’s “never-give-up” attitude was on full display in the World Series, capped with a two-run tying ninth inning in the deciding Game Five in New York and a five-run 12th inning to secure their first World Series Championship in 30 years.

And if winning the World Series wasn’t good enough, Royals backers did especially well as KC was listed as the underdog in each of their last three wins – including a big +140 payout in Game Five. Backing the Royals in all five games would have returned a net profit of +3.7 units – winning three times at a +140, +120, and +110 underdog, then again as a small favorite and having their lone defeat in the underdog role.

While the Dodgers and Blue Jays entered the postseason with what was thought to be the best starting rotations, neither of those teams reached the World Series. Los Angeles has since parted ways with manager Don Mattingly who has since been hired by Miami.

And while the 2016 MLB season doesn’t begin until April 3rd, it’s never too early to start predicting who will win it all next year. A few of the online sportsbooks  have already released their preliminary 2016 MLB World Series Futures, with the Dodgers being listed as the early favorite at 8:1.

Three teams that were in this postseason are right behind the Dodgers at 10:1 odds – that being the Mets, Cubs, and Blue Jays. Defending champion Kansas City is an 18-1 longshot to repeat.

Other notable contenders include the Washington Nationals – who just hired Dusty Baker as their head coach as the fourth team listed at 10:1 odds. St. Louis, Texas, Houston, and Pittsburgh are all at 12:1 odds.

The Phillies are the overall longshot to win it all. Coming off a league-worst 63-win campaign, Philadelphia is a 300-1 longshot to complete a miracle turnaround season.

For MLB Future bettors, paying attention in the offseason is key. It’s important to not only keep track of what big-name players move to contenders, but also what contenders lose key pieces due to trades, free agency, and retirement. Big trades can alter World Series Future prices, although most early movement is due to heavy action.

We’ll check in periodically with MLB offseason updates, but in the meantime there is plenty of football and basketball action to keep our attention until April.